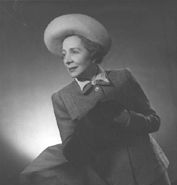 By the time Edith Evans unleashed Lady Bracknell on London’s theatre goers in 1939 she had been already been acting professionally for twenty-seven years.

Famed for her unforgettable performance as the terrifying Lady Bracknell in The Importance of Being Earnest, Edith Evans spent much of her subsequent long career trying to avoid being cast again and again in what she called ‘Bracknell-type’ roles.  An actress of great versatility and no little experience she was frustrated by the desire of some directors, particularly Hollywood film directors, to have her re-hash the character director Bryan Forbes had once described as her ‘great essay in dragonhood’.

By the time Edith Evans unleashed Lady Bracknell on London’s theatre goers in 1939 she had been already been acting professionally for twenty-seven years.  While working as a milliner in London the young Edith had joined a drama class, graduating from this to the Streatham Shakespeare Players where she was ‘spotted’ by Shakespeare producer William Poel.

Poel’s ideas for staging Shakespeare were considered radical at the time, although we would recognise them as almost standard practice now.  He believed that actors should not be overwhelmed by cumbersome costumes and complex sets, but should instead allow Shakespeare’s powerful words to speak for themselves.  He also encouraged his actors to keep the story moving, rather than allow any self-indulgent wallowing in the words, thereby ensuring that something was always happening on stage.

Such ideas of course required the right performers, and in the young Edith Evans Poel had found the qualities he was looking for.  Consequently her professional debut was as Beatrice in Poel’s production of Much Ado About Nothing at the King’s Hall, London, December 10th 1912, after which, as she later famously said, ‘I could hardly go back to my hats!’.

Edith Evans’ professional debut was closely followed by her first film, The Welsh Singer, in 1915.  Edith was always the first to admit that her biggest asset was her voice, and as films at this time were still silent it was not, for the time being, a genre she felt particularly comfortable in.  In fact after three early attempts between 1915 and 1916 she abandoned the silver screen and went back to her beloved stage, not returning to film until The Queen of Spades in 1948.

Once she had found her confidence on screen and was finally able to use that fantastically versatile voice, then Edith’s film career was guaranteed.  In 1952 the film version of The Importance of Being Earnest ensured her extraordinary performance as Lady Bracknell could be enjoyed by generations to come.  Further film projects included The Nun’s Story with Audrey Hepburn and John Osborne’s Look Back in Anger.  During the 1960s she was Oscar nominated twice, and later expressed great surprise at the nominations, at a time when Hollywood was particularly focusing on its younger starlets.

Aside from her Lady Bracknell, there is one other part from the impressive range Edith Evans created that has made a particular impression on the theatre history books.  In 1935 she played the Nurse in the famous John Gielgud production of Romeo & Juliet, in which he and Laurence Olivier alternated in the parts of Romeo and Mercutio.  The production as a whole was well received, and Edith’s performance particularly was singled out, with the critic W A Darlington declaring her ‘Nurse’ to be ‘as earthy as a potato, as slow as a cart-horse and as cunning as a badger’ thereby creating the blueprint for every actress who has played the role since.

Edith Evans was an actress of extraordinary talent, dedicated to her craft, who never stopped working to improve her skills.  The rewards for such dedication were comments such as that from producer Herbert Farjeon who once declared ‘If only I were Miss Evans, I would read Shakespeare out loud to myself all day long’. That, and the label, along with her contemporary Sybil Thorndike, as one of the last great classical actors of the English stage.

Photograph: Edith Evans, copyright © of and supplied by: