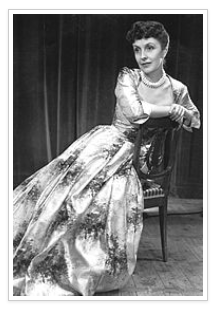 A gifted musician, talented film actress, witty & entertaining writer and of course, Queen of the comic monologue - Joyce Grenfell was a woman of many talents.

A gifted musician, talented film actress, witty & entertaining writer and of course, Queen of the comic monologue – Joyce Grenfell was a woman of many talents.

Her good friend Celia Johnson confessed to feeling jealous of Joyce’s talent, saying it was “perfectly absurd that one person should have all these talents”. But of all her gifts it was her gift for comic monologues and songs for which she is best remembered, and it was this that Joyce always regarded as her real job.

Born Joyce Phipps in 1910, she grew up performing at family parties and social gatherings, often with her American mother, who was herself a talented performer (although she never performed professionally). It was one such impromptu performance that triggered the start of Joyce’s professional career when her friend Stephen Potter persuaded Joyce to perform her character monologue Useful & Acceptable Gifts for the producer Herbert Farjeon. Mr Farjeon was so impressed with her impersonation of a Women’s Institute lady that he took a gamble on Joyce’s complete lack of professional experience and offered her a slot in his forthcoming West End revue show The Little Revue. Joyce was later to say that she felt she owed royalties to the real WI speaker who had inspired the monologue, but not knowing her name she was never able to give the lady her due!

Herbert Farjeon’s gamble paid off, with the Sunday Times critic James Agate singling out Joyce’s performance over those of the other more experienced performers. Her friend Virginia Graham later attributed Joyce’s success to her natural warmth, which she said created “an atmosphere of extraordinary trust and love, so that audiences under her spell felt cosy and somehow cherished”.

This natural warmth also led Joyce into numerous charitable projects, and with the outbreak of the Second World War she had the opportunity to combine her charitable work with her gift as an entertainer when she joined ENSA. Officially known as the Entertainments National Service Association, but nicknamed Every Night Something Awful by its members (due to its notoriously bad organisational abilities) ENSA had the task of arranging entertainment for the troops both at home and abroad. Joyce’s work with them took her round England and Northern Ireland touring military hospitals, and then overseas, eventually visiting 14 countries in all, including North Africa, India and Egypt. Joyce’s time with ENSA was an education for her as a performer, and she later described how the experience helped her to develop her “working muscles”, teaching her how to think on her feet and put on a good show no matter how adverse the circumstances.

Her newly strengthened working muscles stood her in good stead when she returned to London to appear in Noel Cowards 1945 revue show Sigh No More which ran for 213 performances. By the early 1950s Joyce felt ready to take the next step and in 1954 appeared in her first solo show Joyce Grenfell Requests the Pleasure. The show was a hit, and Joyce confessed to great delight at seeing her name in lights. The show transferred to Broadway the following year.

Throughout this time Joyce was also following a career in films and broadcasting. In all she made twenty-four films, but it was her role as Ruby Gates in the St Trinians comedies that brought her the most notoriety. It was this character along with the part of Miss Gossage in The Happiest Days of Your Life that gained Joyce a reputation for playing what she described as “galumphers”, and “gawky overgrown schoolgirl types”. Her mother was horrified at the number of “unattractive characters” Joyce played on film, and was only appeased when Joyce appeared as a glamorous Duchess opposite Gregory Peck in The Million Pound Note.

In 1973 Joyce lost the sight in one eye after an infection. It is typical of her no-nonsense nature that she retired quietly from the stage without fuss or fanfare. She continued to work in broadcasting, appearing regularly on the musical quiz show Face the Music and contributing to Radio 4s Thought for the Day, but the main focus of her creative life became her writing. Over the following six years she wrote two volumes of autobiography, telling her story from her early life and career right up to her final performance in 1973 – a private performance for the Queen and her guests at Windsor Castle.

In 1979 Joyce had an operation to remove her blind eye, which had become cancerous, and she died a month later aged 69. When a Thanksgiving Service was held for Joyce at Westminster Abbey people came from all over the country a queued for hours for the 2,000 places in the Abbey.

Virginia Graham once said that Joyce had an incredibly rare talent for being “funny without being malicious”, and this gift has ensured that her remarkable collection of songs, sketches and writings are as popular now as in her lifetime. In 1988 Maureen Lipman appeared in the hit one-woman show Re-Joyce based around Joyce’s songs and sketches, and more recently she has recorded some of Joyce’s material under the title Choice Grenfell.

Interest in Joyce still continues, with letters to her mother, correspondence with Virginia Graham and her wartime journals all published since her death. But then it is hard to imagine that such a vibrant spirit as Joyce Grenfell would ever lie down quietly.

During Joyce’s early years she attended many parties and gatherings at Cliveden, the house of her Aunt Nancy, and it was here that the young Joyce met and talked with the renowned writer George Bernard Shaw. With such illustrious influence at such an impressionable age it is little wonder she continued writing throughout her life.

Never one to shy from expressing an opinion she was a panellist on the ground-breaking 1949 Radio Show We Beg to Differ, on which a panel of men and women debated subjects that divided the sexes.

In Noel Cowards 1945 revue Sigh No More Joyce was a big hit singing That’s the End of the News wearing a gym-slip with her hair in pigtails, but she was at first reluctant to perform in this outfit, claiming her fans would disapprove. Coward persuaded her otherwise and later claimed he had helped to expand her range as a performer by his stubbornness!

On 7th February 1980 people queued for hours outside Westminster Abbey for the 2,000 places at the Thanksgiving Service for Joyce Grenfell, leading one bemused American journalist to remark “Joyce was a wonderful woman, but she wasn’t Prime Minister, was she?”

Acknowledgements:    Photograph:  Joyce Grenfell pictured in 1954, copyright  © of and supplied by: