National treasure Sir David Attenborough has the nation’s favourite voice, it has emerged.

A spokesman for Scrivens Opticians & Hearing Care, which carried out the study, said:

“We recognise how different voices sound and have our own personal favourites, from the inspirational and most trustworthy to those that sooth and move us emotionally.

“The power of the spoken word can’t be underestimated, communication is an essential part of our mental wellbeing, which is why it’s so important that we take care of our hearing throughout our lives.”

Despite Dame Judi’s high ranking, the top 20 favourite voices are dominated by men and home grown talent, with Freeman, Obama and Samuel L. Jackson the only Americans to feature.

Idris Elba, heavily tipped to become the next James Bond, made it to number 11 in the list with Welsh crooner Tom Jones close behind.

The top preference for women’s voices is soft, upbeat and husky, which fits with the few that made the top 20, including Joanna Lumley OBE, the Queen and Dame Helen Mirren.

For men, the top preferences are deep, slow and soft.

Most people (72 per cent) cringe when they hear recordings of their own voice and more than half of those polled had judged people solely on their voice.

A quarter of us struggle to hear what people are saying

Most worryingly, a quarter admitted they struggle to hear what people say to them when talking face to face.

And over half of those polled had never had their hearing checked.

“It’s hard to admit that we can’t always hear but it’s more common than we think with over 10 million adults in the UK suffering from some degree of hearing loss.

That’s why regular hearing checks are so important, and help is available on every high street.”

We need to do more to take care of our heating. This infograph by Scrivens details the statistics associated with hearing. You can test your hearing online here https://scrivens.com/hearing/online-hearing-test/ 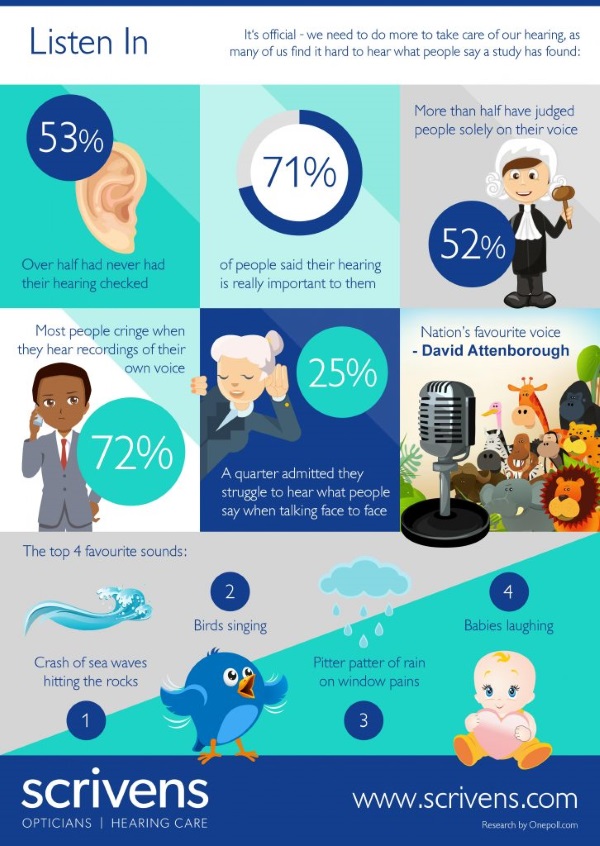 Hearing loss can lead to loneliness

I just want to add that hearing loss can affect how we interact with others and exasperate feelings of social isolation and loneliness. My grandmother suffered from hearing loss and felt people were rude to her because she could not hear them during conversations. This led her to retreating into her home conversing only with family.

Her isolation inevitably led to dementia so our hearing is vitally important to our well being.

November is Hearing Awareness Month so Scrivens have launched The ‘Listen In’ Awards to celebrate and promote those that really listen, care and take the time, unsung heros in our community.

To nominate someone who you think should be recognised in your community for our ‘Listen In’ awards, you can fill out a form in branch or use our online form. We will be taking nominations from 29th October – 29th December 2018 and announcing a winner in January 2019. Show your appreciation for someone that cares!